#EntertainmentOnTwitter: Check out the top names and conversations this Q2 in Philippines 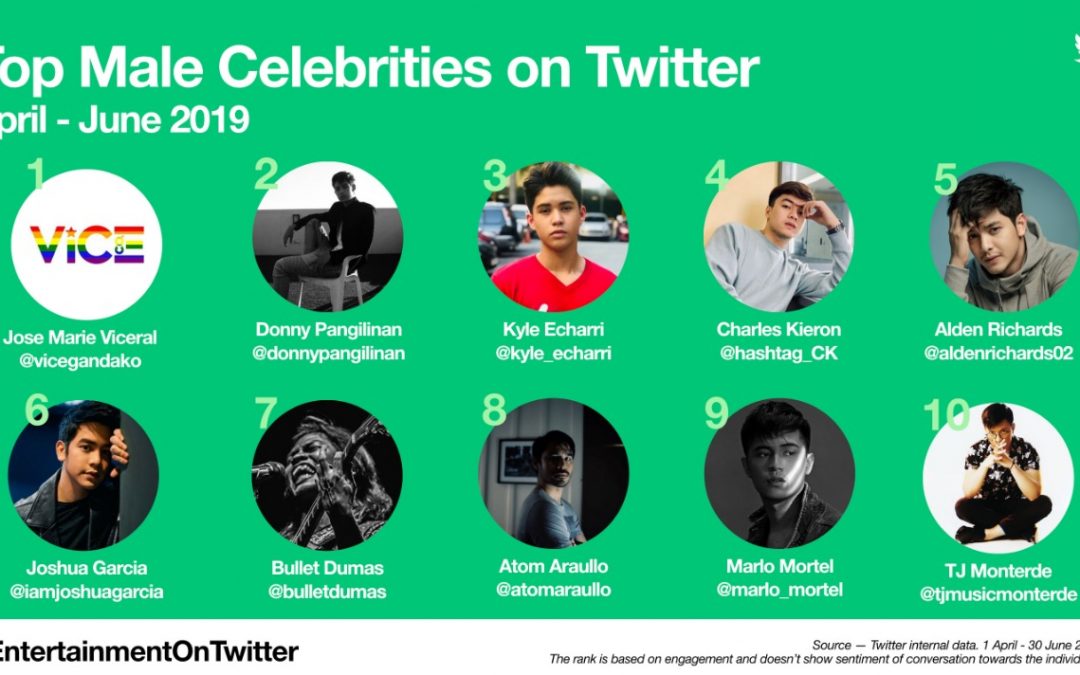 MANILA, 16 July 2019 – There’s always something to look forward to in the entertainment scene: a shocking teleserye twist, a new loveteam, brewing film projects, and even new tunes that fans would love to see at the top trending spot. The buzz never stops, and that’s why Twitter is the go-to platform not just for real-time updates, but also to prove that the creativity of Filipinos goes beyond 280 characters.

“Twitter continues to be the preferred platform of Filipinos to keep track of the latest happenings in the entertainment scene,” Carl Cheng, Head of Entertainment Partnerships, Southeast Asia & Greater China said. “It provides an avenue for celebrities and fans to connect on a more personal level. At the same time, fandoms also grow as they interact with a wider community.”

He added, “How Tweeps converse also evolved into imaginative ways. We are pleased that more than a tool for conversation, Twitter is also the place where people can showcase their creativity in expressing their thoughts and feelings.”

Here’s a rundown of what happened in the Philippine entertainment scene during the second quarter of 2019:

Tweets from the Stars 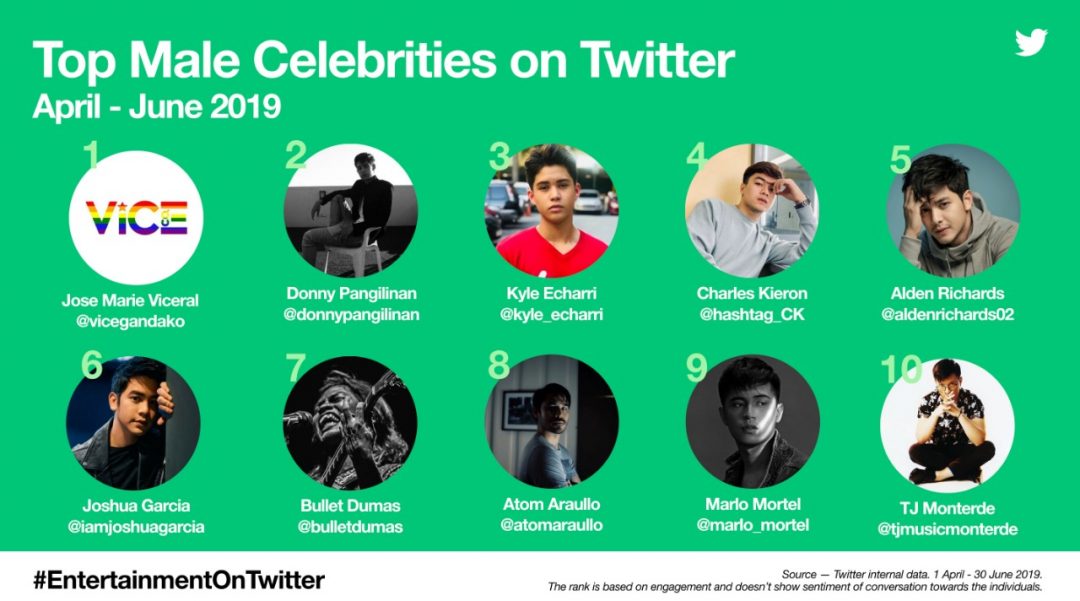 On camera, celebrities portray roles and characters different from their own. Through Twitter, Filipinos get a glimpse of what their favorite celebrities are like in real life. Celebrities mostly use Twitter to establish connections with fans – even through simple ways such as a Retweet, reply or like. What’s more interesting is their unique “signature” ways of expressing themselves on Twitter.

If you are looking for hugot in life or love, trust Vice Ganda (@vicegandako) to serve Tweets full of wisdom and wit. Apart from consistently reigning the list; he also shares his views about life, his appreciation for his fans, and flawlessly funny antics that people find engaging and relatable.

On the other hand, Donny Pangilinan (@donnypangilinan) won the hearts of not just his fans, but the whole Twitterverse for his bravery and for spreading the love online. Through Tweets, Donny was able to express his gratitude for all the projects he is blessed with and he really takes time to reply to his fans despite his busy schedule.

Wish you could see my smile right now. Hope all is well ?? https://t.co/toPTTgjJla 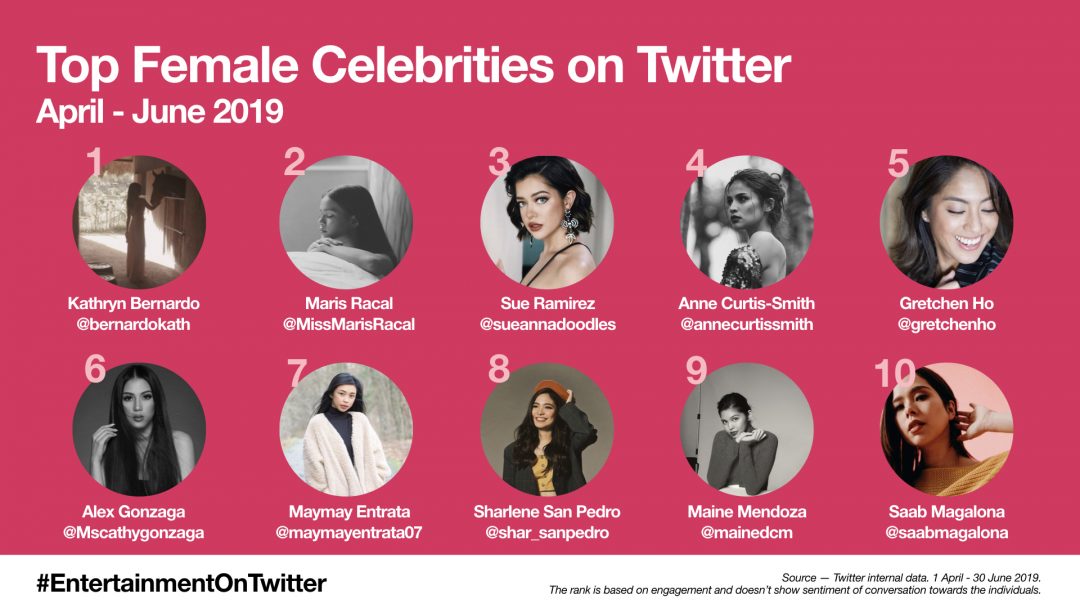 “Teen Queen” Kathryn Bernado (@bernardokath) is all grown up, and her Twitter timeline shows how she blossomed from a child star to a lady. She uses Twitter to generally share intimate moments of her travels and a glimpse into her life away from the spotlight. Kathryn also uses the platform to update fans on her latest projects and business ventures, such as her own nail salon business, KathNails (@KathNails_KCMB).

This photo does not give justice to the beautiful sunset that greeted us upon take off. It’s almost as if it was saying goodbye. ? Perfect way to end our trip! ? Thank you, Morocco! You were everything we expected and more! ? pic.twitter.com/uXcLRk7cWy

People also look out for the talented Maris Racal (@MissMarisRacal) who’s fond of posting funny captions of her photos, earning her the label “Meme Queen.” Amidst all her singing, acting, and endorsement projects, Maris tries to reach out to her fans through #AskMaris.

you can never be unbothered but you can act like it. ? https://t.co/w6iDiigdFM 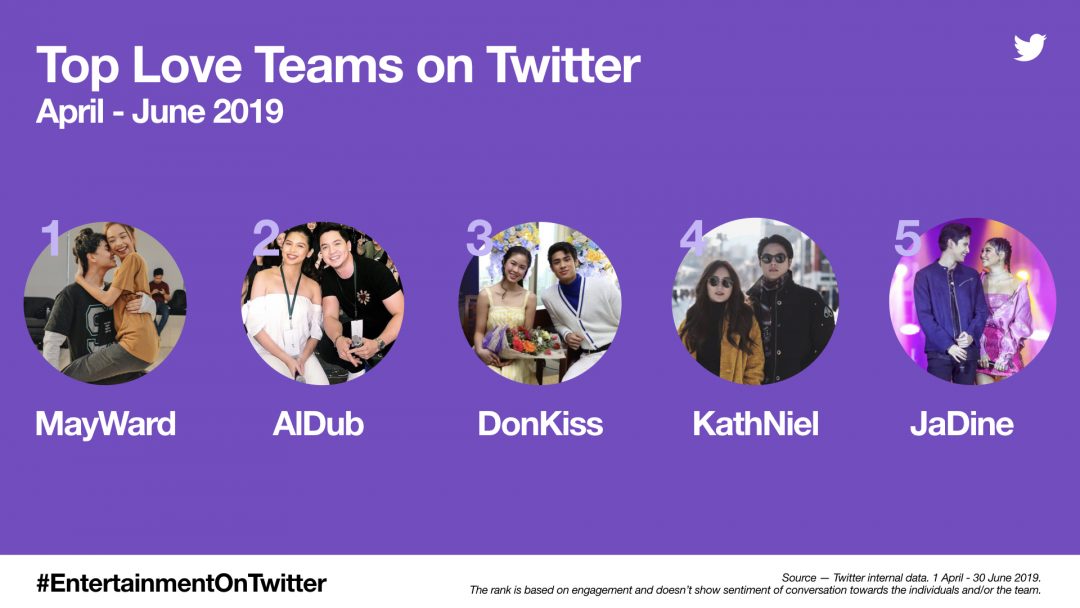 Love teams definitely bring kilig, and there are times when people cannot just contain this indescribable feeling to themselves. Pinoys have been actively sharing kilig moments on Twitter as they find where their fangirl/fanboy heart belongs. Who thought this love would actually bring out their talents?

Remember when Along Espanya trended on Twitter earlier this year? This Twitterserye that featured Kathryn Bernardo’s (@bernardokath) and Daniel Padilla’s (@imdanielpadilla ?) faces captured the hearts, not just of #Kathniel fans but generally of the Twitterverse. Since Along Espanya was well-received by Filipinos, Twitterserye became the craze among love team fandoms. From plot, scriptwriting, to photo editing, fans’ creative juices are squeezed to share the same kilig that they get from watching their idols’ teleseryes.

This is a story of 2 Freshmen Law Students who fell in love w/ each other, went separate ways, then serendipitously met again. Let’s all find out how their story would end.?@donnypangilinan @KissesDelavin #DonKiss WALWALangBibitaw pic.twitter.com/vKlfEeEBKH 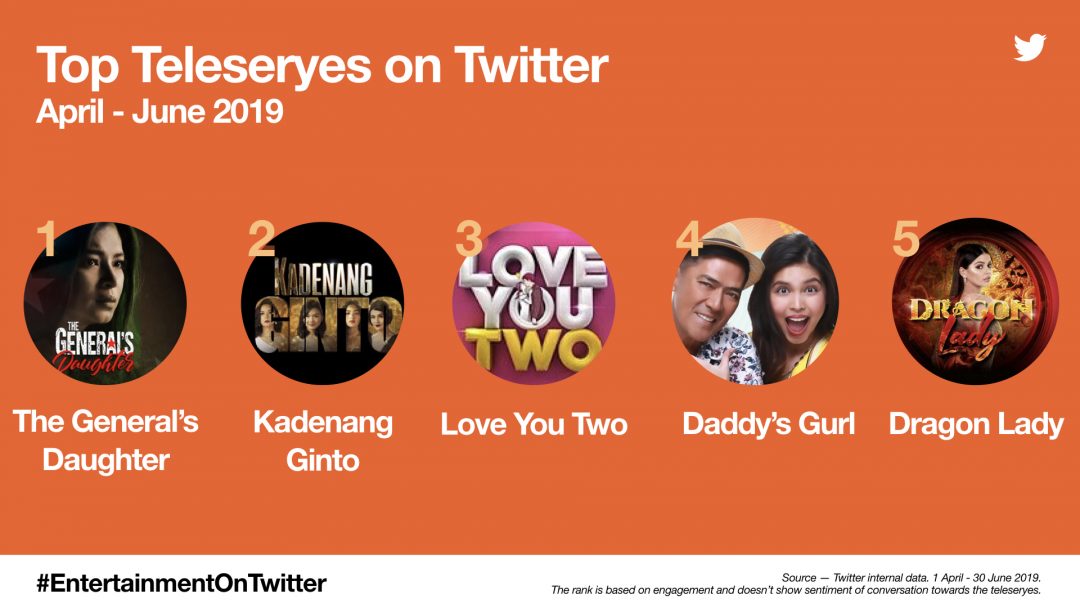 Back in the day, missing an episode of your favorite teleserye is a big deal. Now, Filipinos just go to Twitter to keep track of how the story unfolds! Using their respective official hashtags of the day, teleseryes share #WhatsHappening as it airs on television. This makes it easier for fans to navigate around conversations on their favorite teleseryes.

#TheGeneralsDaughter is the most popular teleserye among the Filipinos as we talk about entertainment on Twitter during the second quarter of the year. With its action scenes and riveting revelations, it climbed to the top from the third spot earlier this year. Filipinos converse on how they found the episode engaging, even voicing out their thoughts on the production, the characters, and guests for the next episodes.

Don’t you dare miss tonight’s episode of The General’s Daughter. The night we’ve been waiting for. #TGDRebelasyon

Upload this in your My Day, Instagram story or retweet this post to spread the word. @143redangel pic.twitter.com/jcc5wyanib

As the drama and gripping catfights intensify, the Twitterverse flares up as the viewers share their rage, sympathy or joy for the characters. With #KadenangGinto, fans are feasting over the Mondragons’ rivalry with memes.

I will rise from the ashes. -Romina Andrada-Mondragon

A true Queen will always rise to the top. -Daniela Mondragon-Bartolome
???#KadenangGinto #KGPagluluksa
(ccto the owner of the pics) pic.twitter.com/YpDGuDiEKW

Movie Reviews: The Power to Influence 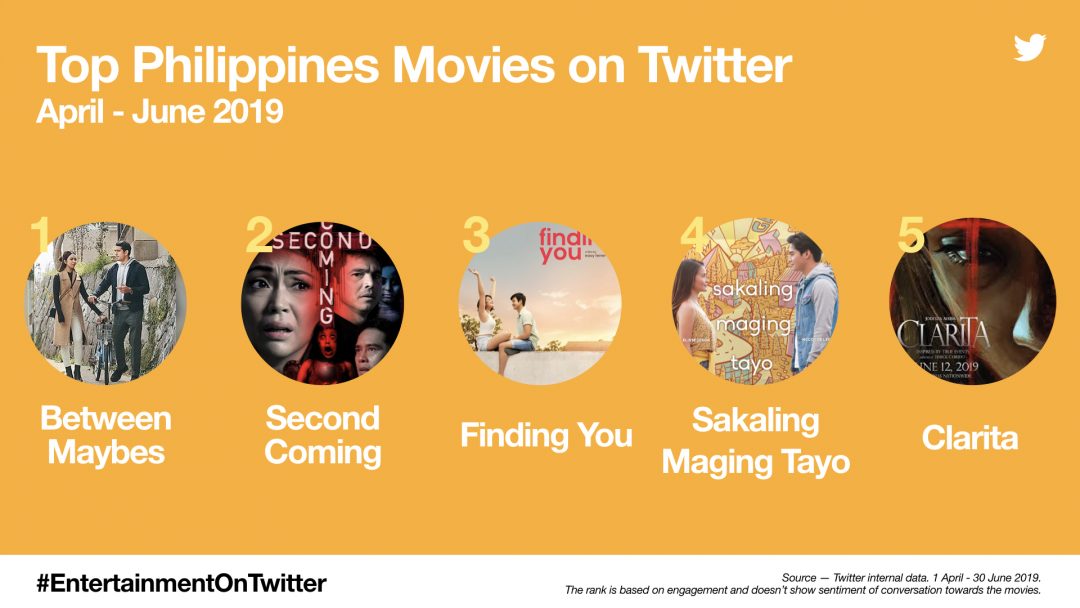 Tweeps talk a lot about their experiences online, including their thoughts if a flick is worth watching or not. This allows almost everyone the power to influence decisions as well as help the local film industry promote their craft.

Reviews and insights are a hit on Twitterverse because they are relatable and they give a sneak peek of what to expect in the film. Frequent movie-goers always wonder #WhatsHappening in cinemas, one of which is the surprising yet impressive tandem of Julia Barretto (@BarrettoJulia) and Gerald Anderson in Between Maybes.

Between Maybes became popular not just because of the actors, but also because Tweeps actually watched the movie and encouraged others to do the same. They even praised Julia and Gerald for delivering a fresh approach to love and on-screen chemistry.

#BetweenMaybes taught us na hindi lahat ng oras love yung pipiliin mo. And it’s not about selfishness if you choose your career, responsibilities, dreams in your life over him dahil if he truly loves you he will patiently wait for your success and will support you no matter what.

It’s still a few months to go before Halloween, but Philippine cinema is already geared up with spine-tingling horror films as early as the sunny months of April. Good thing that Tweeps are always up for the challenge as they watched, got scared, and were eventually delighted upon seeing films like Second Coming and Clarita, both top-billed by Jodi Sta. Maria (@JodiStaMaria). They shared their reactions to shake the jitters away, and they also cheered others to have a brave heart and see it for themselves.

In what could only be described as a pornography of pain, Clarita (2019) is as disturbing as it is captivating. It is simply difficult to look away from all the blood & gore & violence. Jodi Sta. Maria’s acting is, in my opinion, one of the best in PH cinematic history. Go watch. pic.twitter.com/OtEW4AlLbS 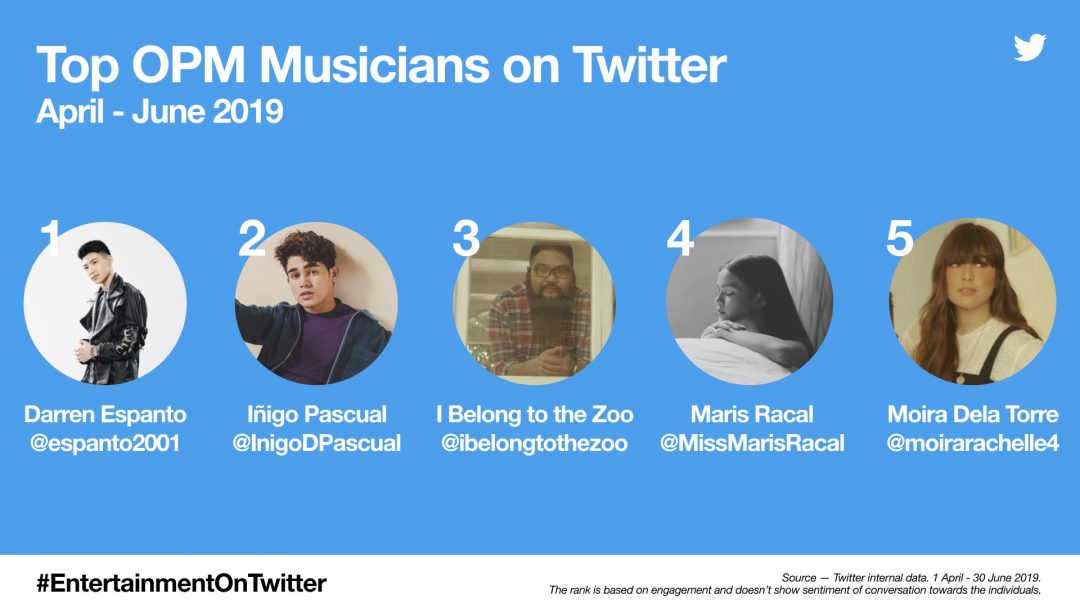 OPM lives on as fans support their favorite local artists through myriad of ways. They dedicate their time to promote new music, share information or song covers, and even take part in celebrating the achievements of their idols.

In the same way, artists such as the phenomenal Darren Espanto (@Espanto2001) use Twitter to let fans get along with his latest whereabouts. Darren is having the time of his life: guesting on shows abroad, singing the theme song of a well-loved film, and preparing for his superb ASAP performances. Despite his packed schedule, Darren manages to interact with his fans on Twitter and even join them celebrate his 18th birthday last May.

Distance is also not an issue as a single Tweet easily connects everyone, just like how Inigo Pascual (@InigoDPascual) keeps fans updated despite his busy schedule as he establishes his music career overseas. By staying online, fans back home feel proud and ecstatic knowing that Inigo is doing well and is still at home in their hearts.

“You’re going global.”
“One of the biggest Male Artist.”
“Our pride, Inigo Pascual.”@InigoDPascual, proud of you!!