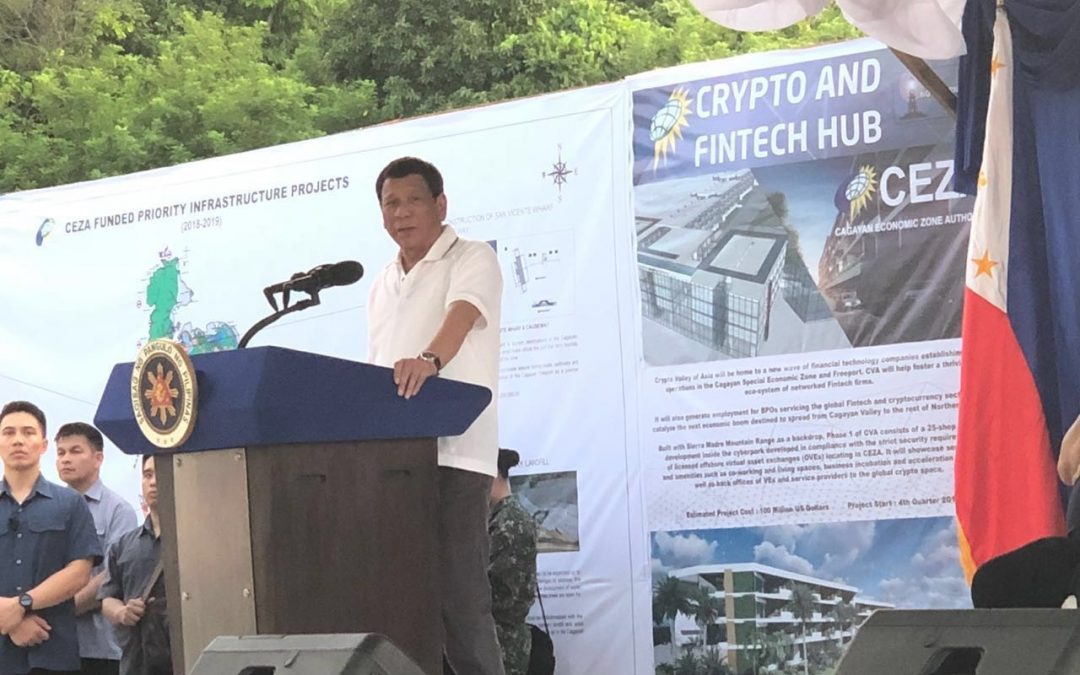 Manila, Philippines – 03 August 2018 – Private property developer Northern Star Gaming & Resorts Inc. (Northern Star) and government-owned Cagayan Economic Zone Authority (CEZA) are pooling their resources to build Crypto Valley of Asia (CVA), a planned development estate designed to push economic growth further in Northern Luzon. Northern Star has secured international and regional companies to locate within the CVA estate, which will be rolled out in three (3) phases. It has also committed gross investments valued at US$100m over the next 10 years.

Guest of Honor Philippine President Rodrigo R. Duterte described the important role of attracting investors. “We should embrace investors to help generate jobs and lift people out of poverty. Let’s welcome the investors so we can show the world that this place is viable for business and investments.”

On the opportunities provided by technology, Duterte adds that investments result to children will be able to go to school. “Children can pursue careers in technology and eventually, they become the supervisors or managers here in CEZA’s Crypto Valley of Asia.” 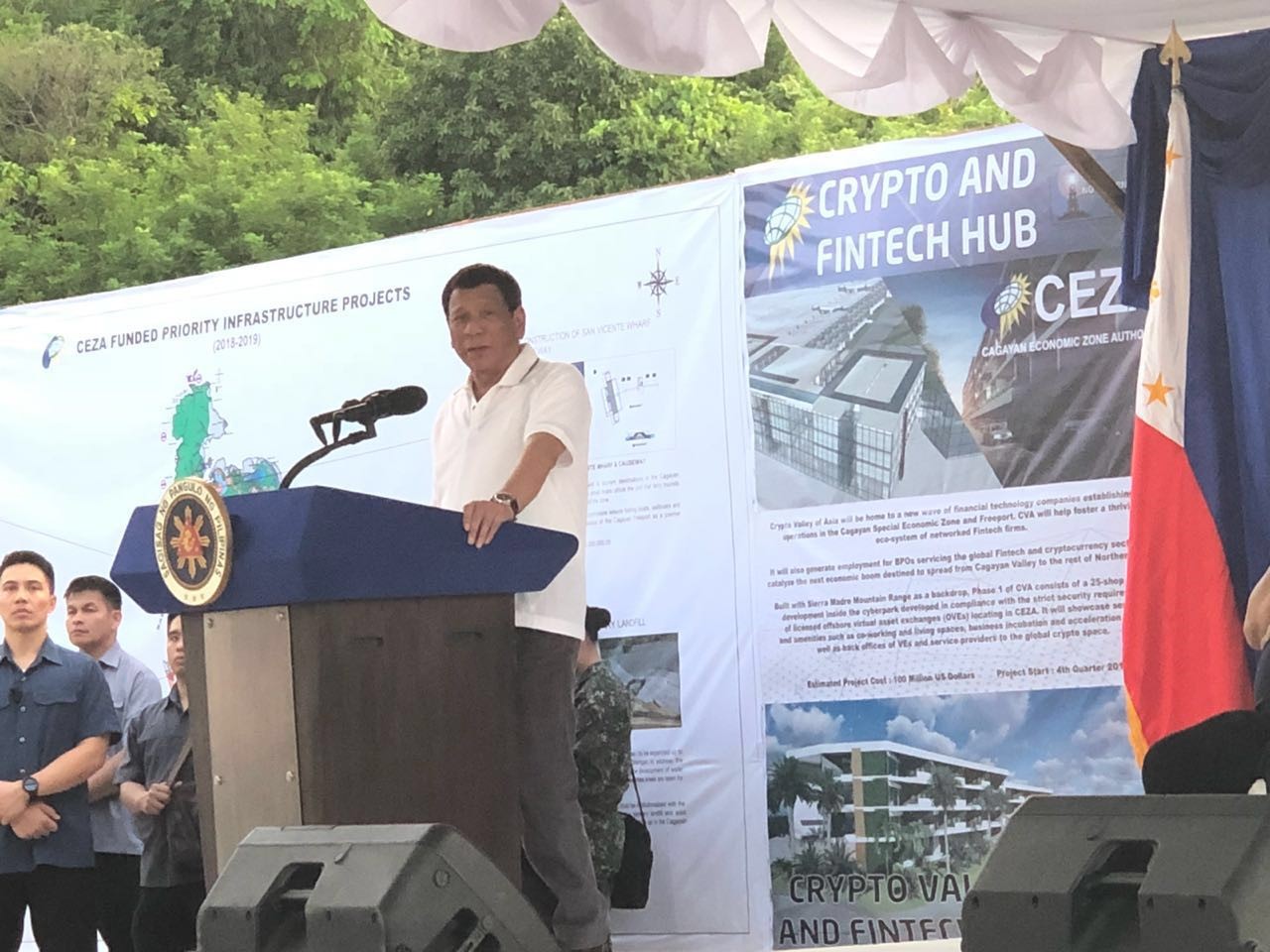 Crypto Valley of Asia will be home to a new wave of financial technology companies establishing their operations in the Cagayan Special Economic Zone and Freeport. CVA will help foster a thriving eco-system of networked fintech firms.

It will also generate employment for BPOs servicing the global fintech and crypto currency sectors and catalyze the next economic boom destined to spread from Cagayan Valley to the rest of Northern Luzon.

CEZA CEO Sec. Raul L. Lambino: “CEZA welcomes the launch of the Crypto Valley of Asia as a critical infrastructure that will serve to attract more foreign investors and global fintech players to CEZA and the Philippines. The Philippines can become one of the major off-shoring destinations for Fintech and blockchain related work.”

Built with the Sierra Madre Mountain Range as a backdrop, Phase 1 of CVA consists of a 25-shop housing development inside the cyberpark developed in compliance with the strict security requirements of licensed OVE’s locating in CEZA. It will showcase services and amenities such as co-working and living spaces, business incubation and acceleration hubs as well as back offices of overseas virtual exchanges (OVEs) and service providers to the global crypto space.

Enrique Gonzalez, Chairman of Northern Star: “Crypto Valley of Asia and CEZA will put the Philippines on the global map of fintech and blockchain. Similar to other progressive jurisdictions such as Zug of Switzerland, we will create an environment that fosters innovation, entrepreneurship and critical skills development thru education and BPO training. With strong global partners that have confirmed entry into our master-planned development, we are confident in the continued momentum in positioning the Philippines as the leading destination for blockchain off-shoring.”

Amongst the many locators and services include: co-working space such as Common Ground of Malaysia; state-of-the-art cyber security and risk assessment by Horangi (Singapore) and Blackpanda (Philippines).

Blockchain Academy, in collaboration with Hanwha of Korea, will also be among the premier locators. The academy is the realization of the MOU signed during President Duterte’s state visit to Korea last June.

The alliance of these captains of industry showcase a group of businessmen with successful track record in real estate development, blockchain technology/cryptocurrency, energy and telecommunications make it possible to build the Crypto Valley of Asia.

A major anchor enterprise is the Blockchain Academy, a partnership project with Hanwha of Korea in line with the MOU signed during President Duterte’s state visit to Korea this year.

Northern Star Gaming & Resorts Inc. (Northern Star) is an early investor in the Cagayan Special Economic Zone and Freeport (CSEZFP). It is a real estate developer focused on CEZA and Northern Luzon. It is the landlord of the largest casino resort complex in the zone and owns land bank holdings that include the Cyberpark of CEZA.

The Cagayan Economic Zone Authority (CEZA) is a government-owned and controlled corporation (GOCC) tasked to develop, promote, manage and operate the Cagayan Special Economic Zone and Freeport (CSEZFP) as a viable transshipment hub with a modern seaport and airport and ample surrounding land area for industrial, commercial and tourism development.  CSEZP is an international gateway with diverse sustainable industries and dynamic economic activities in Asia Pacific, which stimulate local development and inclusive growth in Northern Philippines and neighboring provinces.