Taking care of (others is) business: Dominguez celebrates 20th year with PCPI

Deviating from the norm, Dominguez decided to celebrate their 20th year by arranging a party for children afflicted by Cerebral Palsy in the rehabilitation center of the Philippine Cerebral Palsy Incorporated (PCPI) building in Makati.

Usually, companies who celebrate the same milestone of 20 years as Dominguez opt for lavish parties with high-profile guests, but Dominguez goes back to its roots, back to the humble home office Mel grew the company from. They went back to Mel’s drive of working hard to provide, but this time for the disabled children of the PCPI.

Root of the Heart

Before its official establishment, the company was a one-woman PR group. Before she was President and CEO of the 20-employee Dominguez Marketing, Mel Dominguez humbly started the company with loaned equipment and few business tools in the vast and untouched territory of the relatively young IT industry in the early 90s.

A journalism graduate from the University of Santo Tomas, Mel admits that though she did not have any background in management, it never deterred her from the industry that beheld her.

In her heart, Mel dreamed of prospering, working hard because of her drive to provide for her children as a single mom, not giving up because failing to provide or failing anywhere was really no option. She worked from her home, in the cozy space between her dining room and kitchen.

Now, she does more than just provide for her family, along with the Dominguez team she helps provide for her community as well, proving that “corporate” and “care” go hand in hand in the professional setting.

The company firmly believes in sharing their blessings with their community as having Corporate Social Responsibility (CSR) events are part of their annual itinerary during the giving season of Christmas. Adding another event on Dominguez’s anniversary however was a no brainer, helping others did not need to follow a once-a-year schedule; it was a need that they believed every company had to sate.

“We want professionals to realize that you need to do good toward your community through CSR,” said Mel.

Celebrating by Giving Back 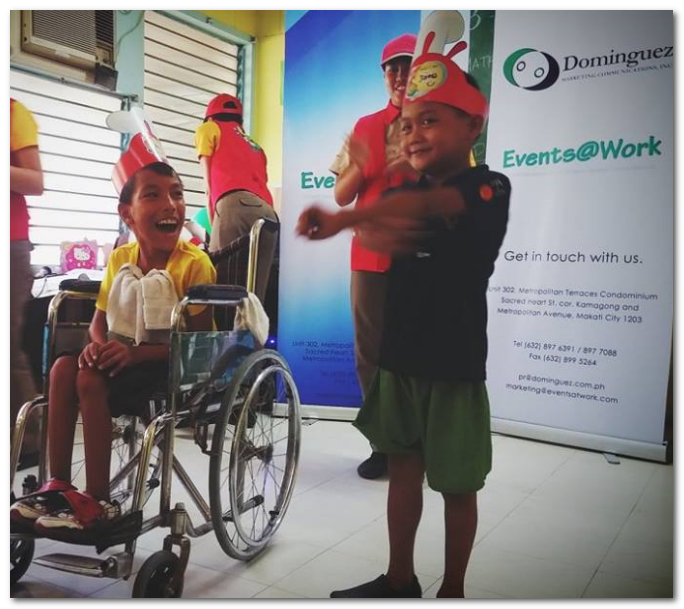 A day of fun was ahead; gathering the children in one of their classrooms, the Dominguez team was determined to accomplish their one task for the event—to bring joy to all of their guests.

Lively music kept everyone upbeat while parlor games got everyone moving—the children bright and excited eventually outdid the Dominguez team, wearing them out in all the games.

But besting the team in games did not satisfy the children as they presented their special talents of singing and even dancing, wowing both their parents and the Dominguez employees.

By the day’s end the children enjoyed the program with quirky antics from the Dominguez team like their cute attempt to dance the popular “Nae Nae” and singing happy birthday as animals. The kids also appreciated the food, especially the appearance of the beloved mascot of all Filipino children, Jollibee.

It was all about bringing smiles to the children and giving their parents a time to relax and enjoy with them.

Looking Ahead and Moving Forward

Any start-up company can do their best in their respected industries and find success when they work hard in expanding their markets and raking in wealth that others will admire them for. But Mel believes that Dominguez will always be a company that works not just because they work for themselves, but because they work for others as well. That Dominguez is a success not just because of the wealth it brings in, but also because of the wealth it gives out.

For worry-free events that work for your company’s bottom-line, visit Events@Work, Events Management Arm of top PR agency in the Philippines.